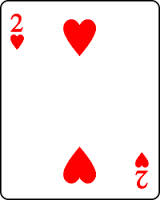 Week 3 of Deal Me In 2015 had me drawing the two of hearts, the second consecutive week that I’ve drawn a heart card. I still haven’t drawn a spade or a club but still plenty of time! This leads me to “With a Burqa” in Flashes of War by Katey Schultz. Deal Me In is sponsored by Jay at Bibliophilopolis. You can find the general guidelines and my list for this year from this post.

This story is a whopping 1 page! And yet, I don’t think it’s even the shortest story in the book. It’s told from the point of view of a female resident of either Iraq or Afghanistan.

The woman, who is never named, talks about what she sees of her city and of her garden, which has a crater holding a dud of a missile dropped by the Air Force. The burqa only plays a small part at the beginning:

“With the burqa, it was like this: the world came at me in apparitions, every figure textured by the mesh filter in front of my eyes. In a city with so much death, it was easy to believe half of the people I saw were ghosts.”

I can’t say that this was my favorite story or that I even really liked it. It did make me look forward/hope that next week I can pull a card other than hearts. 🙂

Bank auditor by day, trivia and knowledge hound all other times.
View all posts by jenvolk5 →
This entry was posted in Deal Me In 2015 and tagged Deal Me In 2015, Flashes of War, Katey Schultz, With a Burqa. Bookmark the permalink.